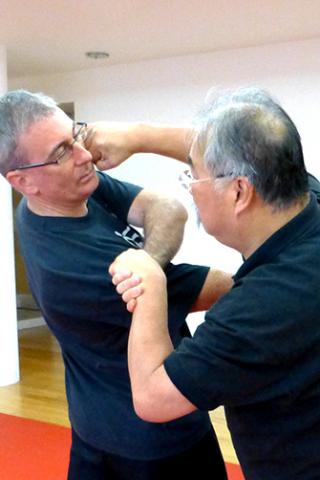 It is without a doubt that Tai Chi Chuan is becoming ever more popular in Western Society. Demand has seen to it that almost all major cities and towns now have Tai Chi Chuan classes on offer. However, whilst this must only reflect well on the public's awareness of Tai Chi Chuan, many would argue that Tai Chi Chuan's growth has been positively skewed towards it's health benefits. Whether this be student or teacher driven, we can not deny that increasingly, little emphasis is given to other facets of Tai Chi Chuan practice.

One area that is frequently paid little attention is the martial aspect of Tai Chi Chuan. Tai Chi Chuan's roots historically stem from the martial arts. It was by combining the theories of Chinese medicine and martial arts, that the importance of training both the mind and the body together with the spirit was recognised, and hence a potent system for combat developed. Thus each and every Tai Chi Chuan movement has a logical combative application. Although the strong ties to the martial arts, the trend of many Tai Chi Chuan classes still is to adopt a 'health only' approach at the expense of martial content. If allowed to speculate, there are many arguments for and against this current teaching trend. Maybe it is to do with consumer demand dictating Tai Chi Chuan's health benefits be at the forefront, or maybe it is due to the low supply of teachers able to demonstrate Tai Chi Chuan as a martial art. These are all valid arguments for receiving less combative instruction within many Tai Chi classes. However what is for sure, the Tai Chi Chuan fighter is definitely becoming a rarity.

What certainly seems to have an element of truth is that latter argument, of increasingly more teachers having less combat experience. Achieving skill in Tai Chi Chuan boxing is by all means is not a simple task. Tai Chi Chuan training especially of the martial nature, necessitates some of the same qualities as other sporting pursuits. Like growing a tree from a seedling, the seedling must first be healthy, fit, and posses the potential and determination to grow and fulfil expectations. The same would be expected from the apprentice. Then for the seedling to realise it's potential and become the great tree it can, requires method, as well as accurate and measured, support and nurturing. This can only be achieved by providing the apprentice with an experienced and knowledgeable teacher. If the seedling is also to mature, the right environment is also imperative. And for the apprentice, the correct social,financial, and training environment, provide the sunlight. However these factors are not enough to guarantee success. Instead, excellence within martial Tai Chi Chuan, is dictated by achieving three fundamental Tai Chi Chuan concepts, each represented by single chinese character.

The chinese character Tun, is written by placing the character for 'concentration' within a closed square. Tun, when literally translated is said to describe 'uniting' or 'grouping together' The principle of Tun is fundamental in Tai Chi Chuan practice. When the mind, body, and the spirit unite as one entity, a formidable force is formed. By being able to combine the potency of Chi energy, with the co-ordinated movements of the body, together with the intention of the mind or as we call 'Yi', achieves a unity that produces devastating effect. Tai Chi training may sometimes only involve developing one or two individual elements at a time. However, a truly gifted Tai Chi Chuan practitioner will be able bring all these individual elements together so that the whole is greater than the sum of the parts. Tun is a truly a universal concept that is not only seen in the martial aspect of Tai Chi Chuan but in all others. Watch a lion stalk it's prey. The unity of controlled power, bodily movements, and intention of action, are distinctly potent. A true master performing his form, should have much the same quality.

Zhun, or accuracy, and focus, is also a pre-requisite to achieving martial ability. Without accuracy and focus, any substance, power, and ability would be rendered useless. Whilst 'Tun' and unity allows us to cultivate force, 'Zhun' gives us the accurate direction of attack. Much like the same way a lens is used to collect and then pinpoint sunlight, we must maintain a state where we are able to focus and channel our abilities for maximal gain. In Tai Chi Chuan, 'Zhun', or accuracy and focus are less important if 'Tun' or unity is absent. More often than not, the inability to achieve 'Tun' is due to the practitioner unable to project the Chi energy through their movements effectively. By practising the movements too softly and slowly (Yin), or too rigid and hard (Yang), will inhibit the flow of Chi. Thus by ensuring a balance between Yin and Yang, Chi flow is more easily maintained. Like reeling silk from a cocoon, the amount of tension used must be correct. Too soft and the thread will sag and tangle. Too much tension instead, and the thread will break. Only by maintaining the correct tension will lead to success break. Only by maintaining the correct tension will lead to success.

Hun is the factor that distinguishes between a good and an exceptional fighter. Literally translated it is a trait that encompasses all the elements of ferocity, cruelty and viciousness. It is little less than natural killer instinct. However 'hun' must not be confused with emotion, such as anger or revenge which instead cloud judgement, suppleness, and clarity of thought - the qualities we need most in combat. Like the lion stalking it's prey, it is patient, motionless in the reeds, with the mind focused on one single aim. Ready to seize the prey without remorse, only at the perfect moment. Yet unlike the lion, Tai Chi Chuan is a measured art with tremendous power. The need to kill is not always a matter of necessity or survival. Instead the 'hun' in Tai Chi Chuan is carefully titrated and measured to neutralise the varying potencies of opposition, as quickly and efficiently as possible.

This is the makings of an exceptional Tai Chi Chuan fighter, the unity of skills, the accuracy of attack, and the courage of his convictions.