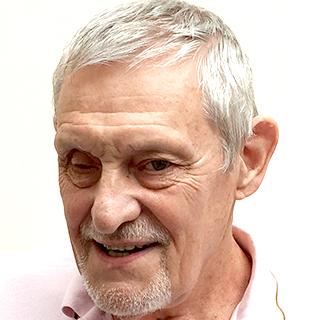 Born in Bethnal Green, in 1940, I left school at 16 and began to realise the true depths of boredom, which are only possible to anyone working in the Civil Service. 5 years later I went to train as a teacher alongside studying singing with Florence Norburg. After College I moved in and out of teaching then moved out of teaching and into (and out of) Show Business, working as a singer in London's West End and on TV. Following this, and still not having learned my lesson, I started a BA at the Open University, which led to 12 growthyears as Headteacher of two very different London schools, where a large part of my job was to stand in front of the fan and smile while everybody else shovelled!  During this time I wrote several articles for various magazines as well as designing, facilitating and tutoring on management courses for the Dept. of Education and Science at London University. Here it was that I found my greatest love - listening to my own voice - and enjoyed being a frequent speaker at International, National and Local Conferences as well as chairing and being a member of many management committees.

After founding the “ARGO Consultancy” in 1988, I was busy designing and delivering a wide variety of personal development and management training workshops to Educationalists, the Social Services, commercial companies and people in the performing arts. It was during this time that I started learning Tai Chi - for a little light exercise - and was lucky enough to find John Ding as my teacher. 22 years later I am still addicted, still learning and waiting for the exercise to get “light”. Now retired, I am back to my first love – teaching; singing, at home, and Tai Chi in Wanstead and at the John Ding Academy in South Woodford. Academy instructor since 1999 after beginining Tai Chi Yang style training in 1990.Peter Pan said that “Work is what you’re doing when you’re not enjoying what you’re doing”; so I don’t work anymore.